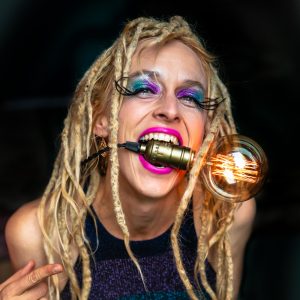 Lenkadu is an avant-garde electronic music producer and a performer from the Czech Republic, now based in Forestville, CA. Her voice is at the center of her music and Lenkadu uses it as an instrument with a wide emotional imprint, daring to venture into sensual animal-like darkness as well as otherworldly angelic light. Her songs are composed with the computer as well as live instruments and field recordings. Anything fun sounding, from a teapot whistle to the squeaks of Lenkadu’s newborn son is likely to get sampled in her songs. Her sound is layered yet remains simple, driven by catchy melodies.