Posadas Navideñas are the main winter holiday celebrations in the Mexican culture, with local parties taking place all across Mexico. With such a large population of families living in Sonoma County who honor their Mexican heritage, the annual event at LBC has become an opportunity for them to share the tradition with the whole North Bay community. It also allows families to pass on that tradition to their children, creating holiday memories connected to their heritage. Now in its 16th year as part of the Rodney Strong Dance Series, Posada Navideña kicks off the holiday season at LBC by inviting families, friends, and neighbors to participate in the festivities that are the focal point of Christmas traditions in towns and villages across Mexico.

While December 16th marks the traditional beginning of the annual celebration in Mexico, performance schedules bring Posada Navideña to LBC on December 9 this year, with the Calidanza Dance Company returning to the live stage after virtual shows during the pandemic. Calidanza has been performing for LBC’s Posada since 2019, and many long-time fans of the program may recognize Artistic Director Steven Valencia as one of the dancers with Instituto Mazatlán Bellas Artes, which performed for our first eight Posada Navideña shows.

To encourage more North Bay families to attend, LBC offers tickets for Posada Navideña at family-friendly prices of $10 for adults and $5 for children, ages 12 and under, plus $2 lap passes for children age 2 and under available the day of the show. We also set aside a number of free tickets for local social service agencies to give to their clients. Tickets are available at the Posada Navideña event page on the LBC website.

Recreating the Full Posada from Backstage

Posada is a Spanish word for “inn,” and los Posadas Navideñas recall the biblical story of the nativity. Much like the European tradition of going house-to-house to sing carols in the early darkened evenings, a local Posada Navideña often begins with a nighttime street procession of locals representing pilgrims. Carrying lighted candles, they follow children dressed up as Mary and Joseph on their search for an inn as they journey to Bethlehem. Singing a special posada song, the pilgrims knock on doors along the way as neighbors emerge to purposely refuse shelter (in song) until the procession reaches a designated house, where the party has been arranged.

As Sonoma County’s gathering place for the arts, LBC itself has become an intrinsic part of the tradition as it offers an accessible and spacious hub to stage all elements of the event safely. LBC’s Posada Navideña begins with a ballet folklôrico stage performance, followed by the traditional procession around the outside of the building. Children dress up, and patrons carry lighted candles, going from one set of doors to another until they reach the party entrance, where LBC staff snuff out the candles. Inside, tables are lined with art projects. Everyone receives a goodie bag with traditional posada treats, including animal crackers, peanuts in the shell, little oranges, and hard candy.

LBC’s Posada celebration is one of the earliest programs proposed and implemented by LBC’s Latino Advisory Council (LAC) in its mission to represent the region’s large Latinx community –its voices and interests – in LBC’s arts and education programming. The event continues to receive local support from LAC members, as well as the City of Santa Rosa, local radio stations, Rancho Mendoza, and Clover Sonoma.

“It started as an add-on celebration in the lobby after the dance performance,” said Melanie Weir, Associate Director of Education and Community Engagement, who worked at the first Posada after-show gathering in the lobby in 2008. “Even that first year, so many people stayed. But each year, it grew, with the performance selling out earlier, as more and more families—regardless of heritage—made it part of their holiday tradition.”

Because of its popularity, by 2009 LBC’s Posada Navideña incorporated the traditional candlelight procession, and we relocated the party to the spacious 6,000 square-foot atrium at the center of LBC facilities to accommodate more arts activities, three piñatas, and refreshments for a larger crowd. It gave us room for more Christmas trees, loaned by LBC business partner Kringle’s Korners, which sets up a public holiday tree market on campus every year.

Like many live entertainment programs, LBC’s had to alter its Posada Navideña in the recent past. In 2021, we worked around the pandemic shutdown by presenting a virtual way for families to enjoy the ballet folklôrico performance in their homes. While it meant trimming the procession and party from the program, nearly six times the viewers saw that show than the 1,600+ who can attend the live show each year. A smaller version of the posada tradition returned to the lobby in 2017 because of wildfire damage to the building and in 2019 due to excessive smoke from another wildfire, although patrons were still able to revel in the live stage performance.

“It’s not the holidays until Posada!”

“After 16 consecutive years, Posada Navideña also has become as much a beloved tradition for the staff and volunteers at LBC as it is for the whole community,” said Melanie. “For many of us, this program launches the season with what we most treasure about the holidays and the work we do—gathering to celebrate music, dance, and community. For that reason, it seems the program keeps getting better.”

“It’s not the holidays until Posada,” said Tracy Sawyer, Community Partnerships Supervisor for our ECE programs. “It’s one of the most labor intensive program we offer, with the procession, the party, the whole event, but it’s one of the sweetest experiences. We get to see families all dressed up, walking together in the dark, holding candles, sharing sheet music, and singing together. I’ve even seen patrons shed a tear or two, they are so moved.”

John Cain, Associate Director of Advertising and Media, has been the man in charge of serving a cold version of the traditional Mexican Christmas fruit punch from the very beginning. “When the doors first open, a wave of laughing, chatting people surges in a blur from one end of the atrium to the other and then surges back in the other direction before it disperses, and people spread out among the different tables and activities.”

Thanks to Rodney Strong Wine Estates, in addition to the main Posada event, every year LBC also presents a daytime Posada Navideña performance for local schools, followed by a student clinic in ballet folklôrico, which schools attend at free and reduced prices. During the workshop, students enjoy refreshments and create luminarias that are displayed during the evening procession. 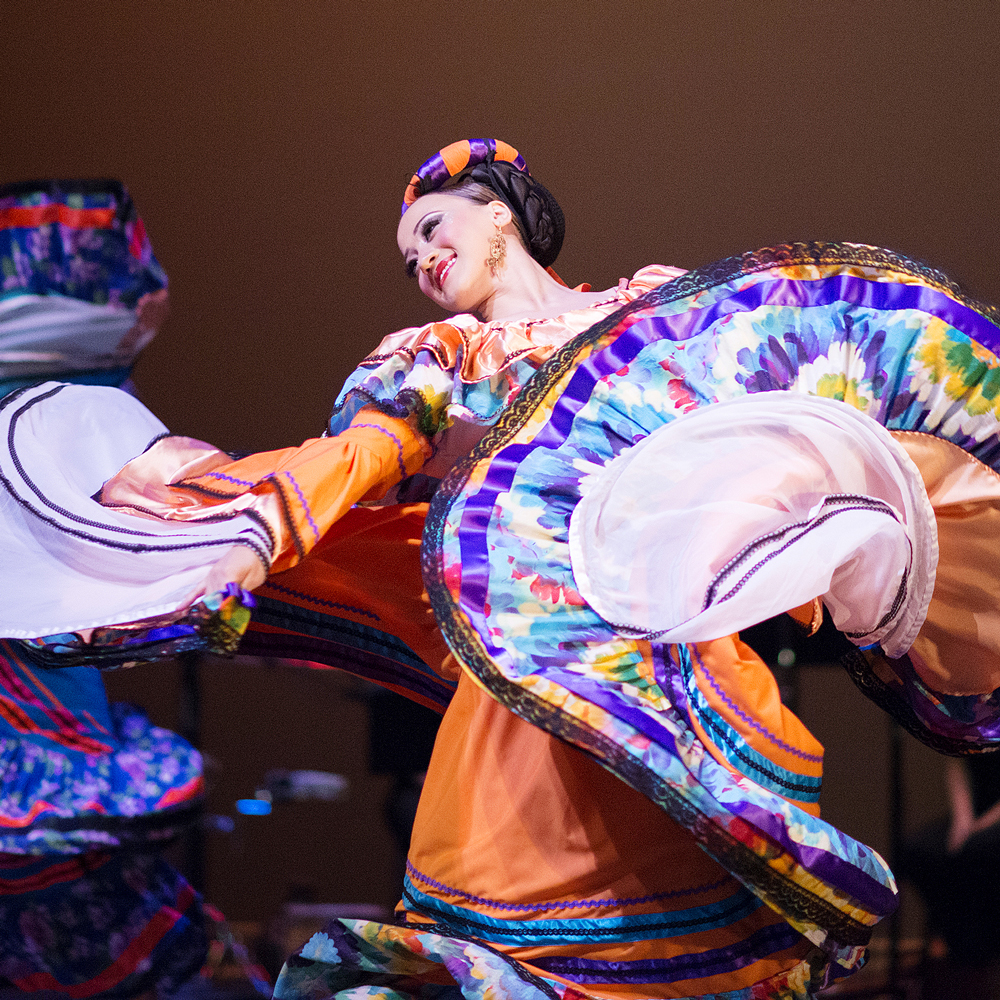 LBC hosts a free community dialogue to explore how hip hop is infused in local...